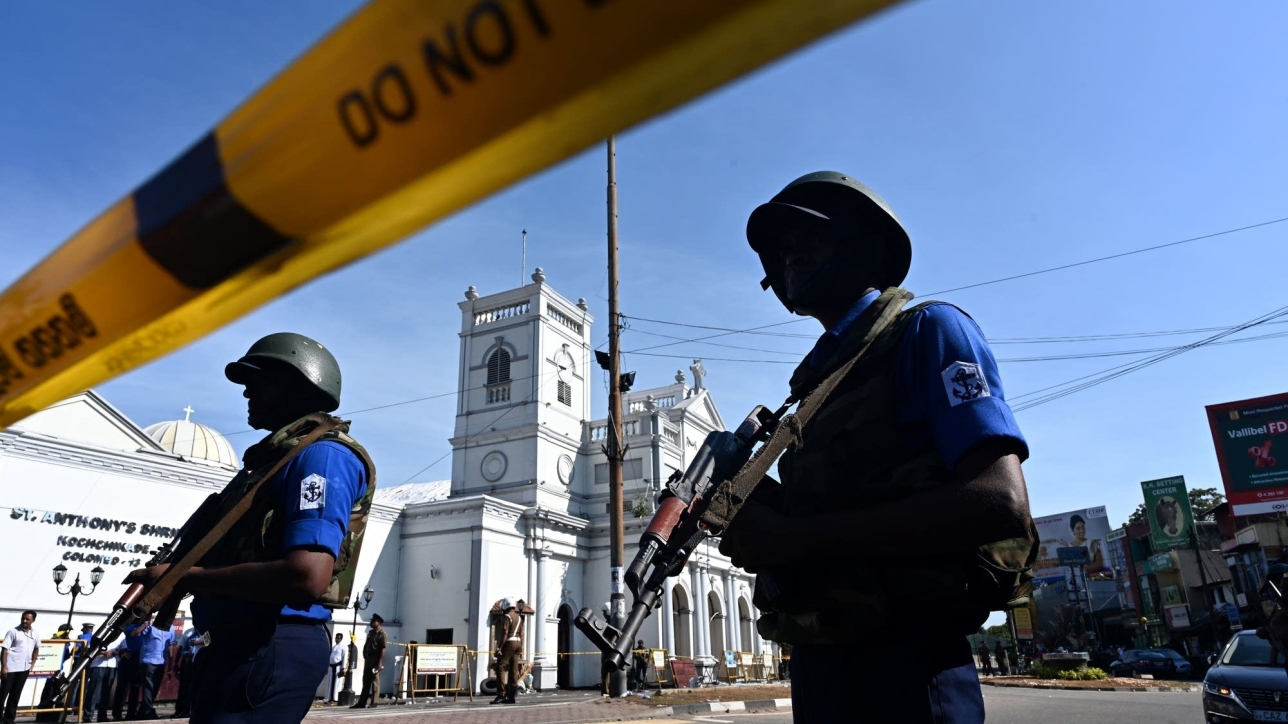 Scarcely five weeks have passed since terrorist attacks targeting Muslims rocked New Zealand and shocked the world. We are now confronted with the latest devastating attacks in Sri Lanka that have claimed 253 lives:

Similar to the New Zealand attacks, places of worship were targeted during their peak times of attendance; on this occasion, Easter Sunday. Tourist resorts, like three of the capital’s 5-star hotels, were also targeted and news has since emerged of foreign victims, including children:

“Eight British citizens are among the hundreds killed in explosions in Sri Lanka on Easter Sunday, the UK’s High Commissioner to Sri Lanka has said.

They include Anita Nicholson, 42, her 14-year-old son Alex and her 11-year-old daughter Annabel…Mr Nicholson said his family were killed at a table in the restaurant of the Shangri-La Hotel, in the Sri Lankan capital Colombo, while they were on holiday.” [2]

These brazen attacks underscore the urgency required by government and security services to adopt more transparent and inclusive approaches to confront terrorist threats; particularly since the geographical demise and defeat of ISIS. Securitised strategies that solely target communities, instead of working with them, have proven to be counterproductive in the long term. ‘Quick wins’ may provide the illusory effect of victory against terrorism but these are relatively short-term. Whether these latest attacks are reflective of the above contention remains to be seen, as the Sri Lankan government and military’s defeat of the Liberation Tigers of Tamil Eelam (LTTE) (more commonly known as the Tamil Tigers) 10 years ago has been considered a successful formula in combatting terrorism:

“On May 18, 2009, after twenty-five years of riots, terrorism, and war, the LTTE ultimately admitted defeat. It took various strategies to finally achieve peace. The Sri Lankan government gained popular support, advanced their military strategies and operations, gathered intelligence by capturing enemy forces, attacked the LTTE’s strongest points, the cadre, and exploited their support network, the last a critical vulnerability. Many governments are fighting similar battles today but have not been able to counter their enemies as the Sri Lankan government was able to. Therefore, the Sri Lankan Civil War might be used as an effective reference, not just for how to successfully defeat an organization like the LTTE, but also for the kind of tactics to expect from a terrorist organization like the LTTE.” [3]

The Good, the Bad & the Ugly: Real expertise vs. Pretenders

In February – 7 weeks before  these attacks – a conference was convened in Colombo, Sri Lanka in which experts were invited to deliver workshops regarding the risks posed by returning terrorist fighters and their families (RTFs). Rehabilitative and reintegrative strategies were key features of the overall conference, alongside the recommendation that governments establish effective partnerships with civic society, in order to develop a holistic approach to address RTFs. Attendees resided at The Kingsbury Hotel, where the conference was also hosted, and a site of the latest attacks.

I was among the attendees and participated in workshops in which actual practitioner experience and expertise were on display. This was a refreshing alternative to the surfeit conferences across Europe, where a dearth of bona fide expertise remains evident but is replaced by inexperienced and ineffectual claimants who are keen to maintain a visibility that attracts statutory funding. Unfortunately, these entities are perpetuating the existing threat of extremism due to their lack of experience and strategic foresight. Listening to perspectives from practitioners at statutory and grassroots levels – now working alongside each other – provided insights to strategies where compromises were negotiated by both sides in order to effect not only peaceful transitions, but rehabilitative and subsequent participatory processes within society. Some may argue that this type of statutory-societal engagement and negotiation have taken place within a western context, i.e. the Good Friday Agreement,[4] however, government strategy continues to prefer ‘formers’– reformed extremists – over that of experienced practitioners or communities that have successfully countered extremism for decades. In fact, many of the so-called formers, now lauded by government, were among those actually challenged and rebutted by these very same communities that remain marginalised. Indeed, as a result of duplicitous schemes from some formers, their previous extremist rhetoric has since been maliciously attributed to their detractors:

“By April 2002, he had been picked up by the security services for membership of Hizb-ut-Tahrir – the “Party of Liberation” – and ended up spending four years in an Egyptian jail. Since returning to Britain in 2006, though, Nawaz’s career has taken an improbable turn: he has set himself up as an expert on how to prevent radicalisation, and has even advised prime ministers and presidents, including David Cameron and George W Bush.

Nawaz likes to do things in style. In 2007, after dramatically leaving Hizb-ut-Tahrir, he decided to create an anti-extremism thinktank with his friend Ed Husain, another former Islamist.” [5]

Almost 5 years ago, I also highlighted:

“The frequent characteristic or tendency of those claiming to have abandoned previous religious extremes is their ability to ‘stir up anti-Muslim sentiment in an attempt to confer self-legitimacy.” [6]

During one of my workshops, I requested that delegates work in designated groups to consider critical forces that influence the socio-dynamics of their societies. In laymen’s terms, this can be envisaged as a SWOT analysis whereby strengths, weaknesses, opportunities and threats are considered. However, the difference with the framework I introduced required consideration of these elements as competing gravitational forces. For example;

Delegates identified various characteristics under each category according to their official and personal perceptions of their respective societies; however, when asked to reconsider these experiences from the perspectives of vulnerable and marginalised individuals or communities, the assignment became more challenging. This was anticipated, highlighting an obvious but uncomfortable reality: governments and their security apparatus continue to fail to take into account various factors that affect grassroots communities from where susceptible and radicalised individuals often emerge. Instead of deploying community-focused (partnership initiatives), targeted strategies that aim to yield intelligence and treat communities as suspect, (i.e. community-targeted) appear to be the default preference. In the event, governments need to broaden their respective definitions of social control, which is often promoted (and occasionally enforced) as legitimized identities: that which is societally acceptable according to their (archaic or even, newly introduced) legislation. Failure to remedy this approach will continue to evoke, among elements of civil society, social deviance or resistance identities – as is being witnessed to varying degrees across Europe and other parts of the world today.[7] In its most sedate form, social deviance can be augmented via protest; however, at its most destructive, it can proceed along a trajectory resulting in terrorism, particularly when securitised actions also traverse similar parallel paths of what is often perceived as state sponsored/legislated terrorism.[8]

“In the aftermath of a co-ordinated series of terrorist suicide-bombings in churches and hotels in Sri Lanka on Easter Sunday that left nearly 300 people dead, attention has begun to focus on the government’s failure to act on warnings that such an attack was imminent. A bitter political battle between the president, Maithripala Sirisena, and the prime minister, Ranil Wickremesinghe, had so crippled the government that it lacked the information to prevent the catastrophe, blamed on a little-known jihadist group.” [9]

As the blame game and political infighting intensifies within the Sri Lankan government, conspiracy theories continue to grow around entities considered to be complicit in these attacks. Other observations have noted the proximity – geographically and time-wise – of the latest attacks to the recent atrocities committed in New Zealand and how, on this particular occasion, churches were targeted instead of mosques and temples. This is true. Also true is the likelihood of extremists’ – both religious and irreligious – fury at the overwhelmingly positive response toward Muslims following the New Zealand attacks. White supremacist extremists were initially jubilant, justifying the attacks as recompense for terrorism committed by a minority of Muslims; however, their delight was quickly replaced by anger at the subsequent reaction and solidarity exhibited toward Muslims. Similarly, the minority of extremists allegedly subscribing to the Muslim faith will have been incensed due to their thwarted objective to garner a groundswell of support for their cause among co-religionists in the west. In view of the above, perhaps an attack on another faith group should have been anticipated:

“The massacre in churches in Sri Lanka forms part of a global pattern of religious persecution and hostility. To target Christian churches on their holiest day of the year is not only an attempt to kill as many families as possible, but also to maximise the shock and demoralising effect of the attack, a tactic familiar from the sectarian wars in Iraq.” [10]

Another truth, shared by the vast majority of law abiding citizens the world over, is the inviolability surrounding places of worship. Those who seek to violate their sanctity – as witnessed in New Zealand and Sri Lanka (not to mention countless other places) – possess no character worthy of acknowledgement, except cowardice. They contravene what is affirmed in the Qur’an:

“[They are] those who have been evicted from their homes without right – only because they say, “Our Lord is Allah.” And were it not that Allah checks the people, some by means of others, there would have been demolished monasteries, churches, synagogues, and mosques in which the name of Allah is much mentioned. And Allah will surely support those who support Him. Indeed, Allah is Powerful and Exalted in Might.” [11]

Conclusion: The shape of things to come?

The scale of these latest attacks and the fact that it occurred in yet another society that was enjoying relative security and tranquillity is disconcerting as the intimation is such that extremists are once again regrouping and becoming emboldened:

“The carnage in Sri Lanka, one of the worst terrorist atrocities this century, could signal the start of a new campaign of “spectacular” attacks around the world.” [12]

Warnings against premature celebrations and declarations of victory[13]have been issued before by those of us aware of the toxic and distorted ideology that fuels extremism.[14]

This sentiment was echoed in my article in which Shamima Begum’s return to the UK was discussed. Bringing her and others to face justice and/or effective monitoring via robust disengagement programmes is a decidedly more effective strategy than leaving her to live, undetected in no man’s land.[16] Those of us familiar with, and experienced in effectively countering extremism via solution-based strategies, remain concerned – indeed, alarmed – at the apparent complacency of existing governments and their funded entities who lack the required agency to proactively address the ongoing threat of terrorism revisiting our shores in the not too distant future. Simply showing up for a myriad of uneventful conferences or meetings and applauding one another’s visibility in an attempt to confer self-legitimacy does not prevent or combat the ensuing threat – it only exacerbates it.

[7]Associated Press: ‘France’s yellow vests: Who they are, what they want and why’, ABC News, 20thApril 2019: https://abcnews.go.com/International/wireStory/frances-yellow-vests-62523990

[16]Baker, A H: ‘A Precedent for the President & UK: 22ndFebruary, 2019: https://abdulhaqqbaker.com/a-precedent-for-the-president-ignore-at-your-peril/